Arcmanoro Niles shines a positive light on our perceived failures 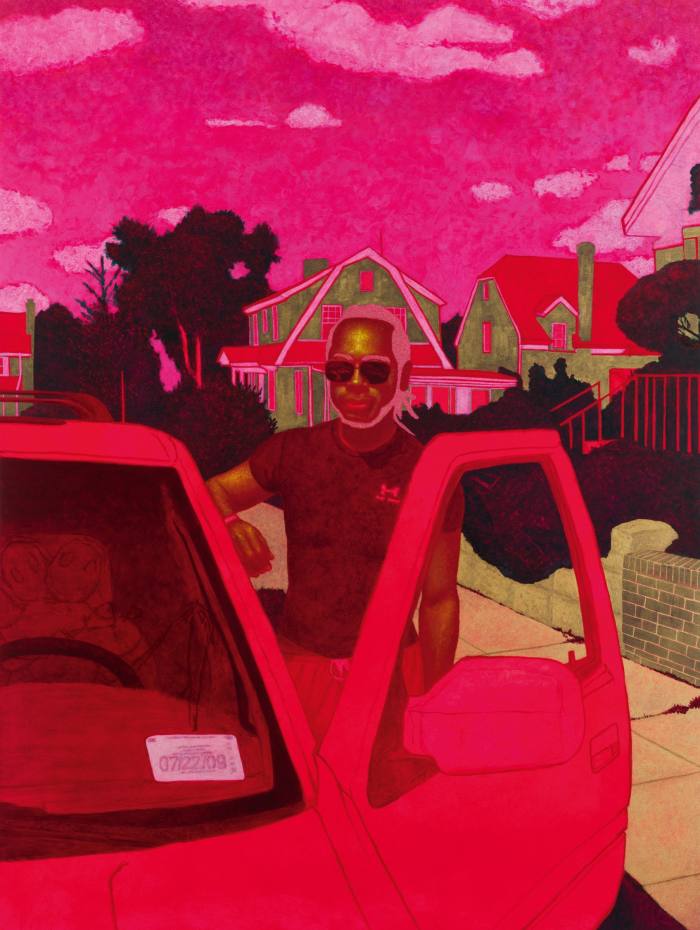 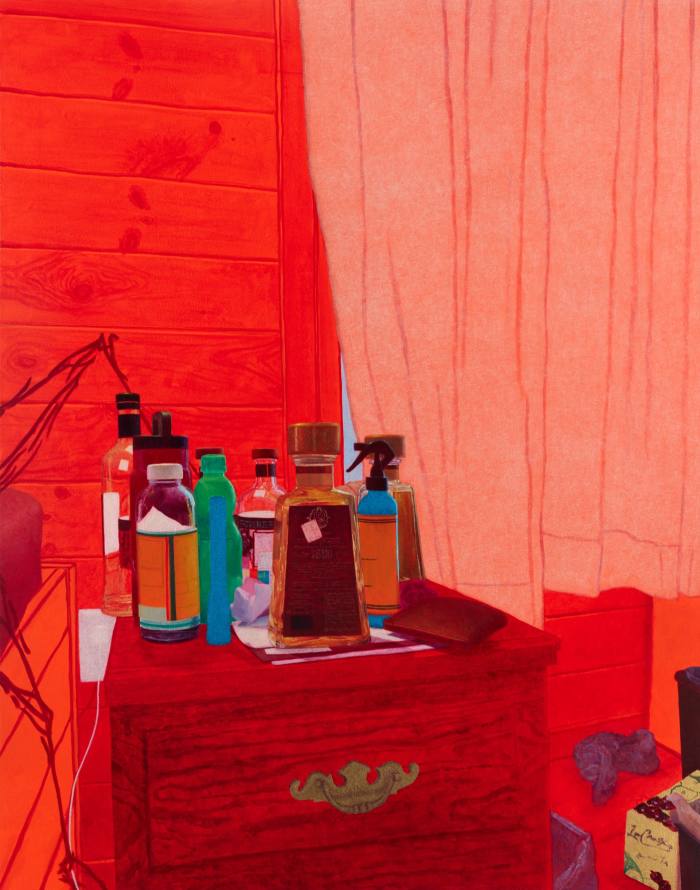 The neon-toned canvases of New York-based painter Arcmanoro Niles show people engaged in seemingly mundane acts, often accompanied by small, alien-like creatures. These supernatural beings – which Niles refers to as “seekers” – act as manifestations of the subjects’ primal impulses and desires, inviting the viewer to imagine what events might have occurred around the scene. One painting shows a woman waiting at a bus stop, while a gremlin-like seeker with fiery pink eyes wields a knife in the corner; in another, a father and daughter sit on their stoop with their dog while a bawdy creature lurks in the background.  Now a new body of Niles’s work is being collected into a book and exhibited at New York’s Lehmann Maupin gallery. Featuring a series of portraits and still lives, as well as the artist’s first landscape, the works show our perceived failures: a still life of a bedside table strewn with tequila bottles and receipts; a man getting into his car after being kicked out of his house, his iridescent gold skin and hair daubed with pink glitter lending the painting a numinous quality. “All of these moments in life that people look at as failures are just a part of growing up,” Niles says. “When I look back at my own experiences, they weren’t really failures at all.”

Arcmanoro Niles: Hey Tomorrow, Do You Have Some Room For Me: Failure Is A Part Of Being Alive is at Lehmann Maupin, New York, until 28 August.

Tyler Mitchell looks back to his roots in the American South 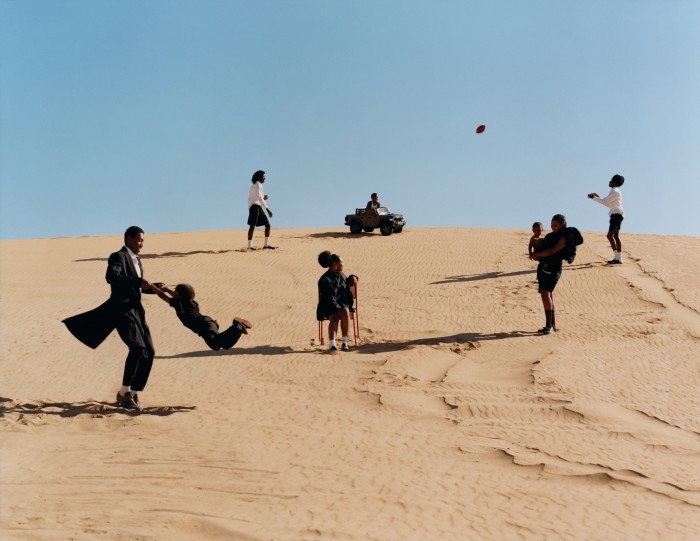 Tyler Mitchell looks back to his roots in the American South Riverside Scene, 2021, by Tyler Mitchell Albany, 2021, by Tyler Mitchell Atlanta-born photographer Tyler Mitchell rose to fame at the age of 23 when he became the first black photographer to shoot the cover of American Vogue, photographing Beyoncé for 2018’s September issue. Since then, he has gone on to shoot campaigns for JW Anderson and Prada, and he photographed the US vice president, Kamala Harris, for Vogue this year. Now he is turning his lens on families in Georgia for a new series that will debut at New York’s Jack Shainman Gallery this month. Exploring ideas of community and the American South, the works capture subjects engaged in leisurely pursuits: lazing on top of a picnic blanket or painting on the sun-dappled banks of a river. The latter is a tableau reminiscent of Georges Seurat’s A Sunday on La Grande Jatte, and subverts art historical notions of outdoor leisure as the preserve of white gentry. “I was trying to get to the very root of what it felt like growing up in the American South,” Mitchell tells How To Spend It. “I wanted to unlock or reimagine certain possibilities about what black safe space can look like.” 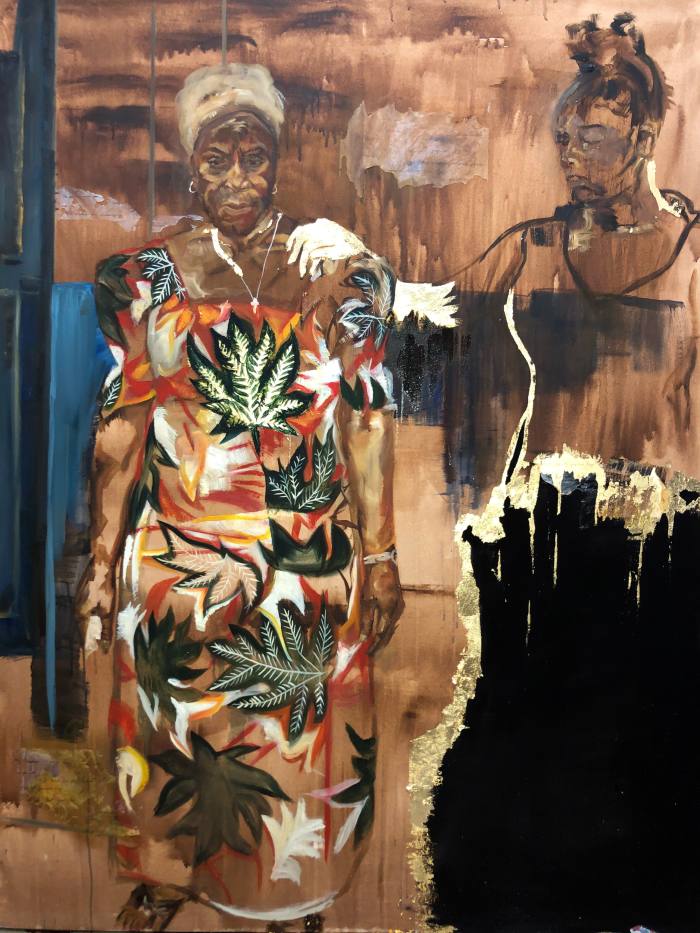 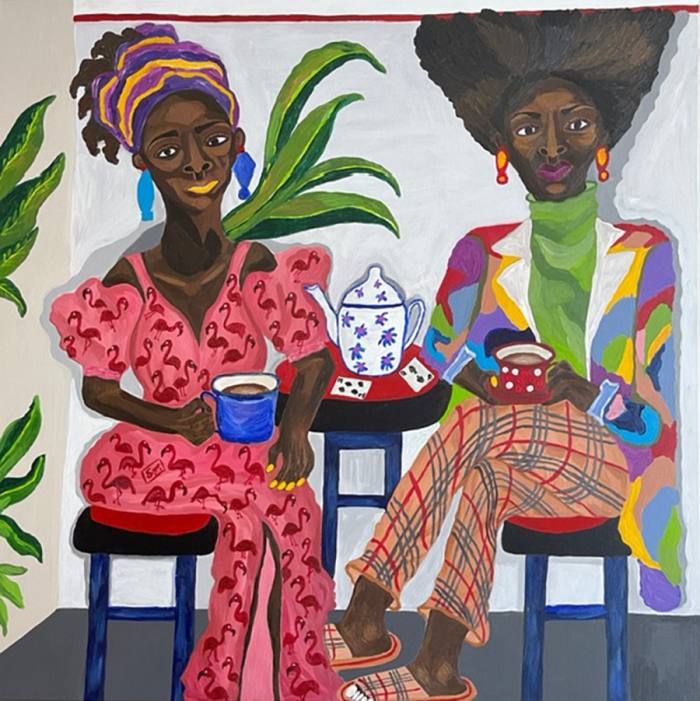 Eighteen emerging women artists are brought together to consider different representations of the black female figure in Mother Of Mankind, a group show at London’s HOFA Gallery on Bruton Street. Curator Adora Mba has gathered work from across Africa and its diaspora, including Nigeria, Ghana, Canada, the UK and France. “The women presented in this show are in the early days of their artistic careers,” says Mba, “yet already making waves and drawing attention in an industry that tends to be more supportive of their male counterparts”. Highlights include the silhouetted figures and textile-inspired patterns of Washington-based artist Jamilla Okubo’s acrylic paintings; London-based Sophia Oshodin’s figurative works on female friendship, domesticity and clothing; and British-Nigerian artist Tobi Alexandra Falade’s tonal oil paintings exploring ideas of African identity.

Mother Of Mankind is at House of Fine Art, London, from 22 July to 31 August.

1. Kicked Out the House for Living Fast (I Never Held Love in My Gaze So I Searched for it Every Couple of Days), 2021, by Arcmanoro Niles © Courtesy Arcmanoro Niles and Lehmann Maupin, New York, Hong Kong, Seoul and London